Home > BUSINESS > Why your startup is not funded by big companies ?

The founder of an early-stage company, which was still trying to figure out product-market fit, asked me questions about getting acquired. He reached out because of some suggestions I made in my newsletter that big companies (BigCo) are slow, hold the bulk of the cash in their industry, and are consequently stifling innovation. He wanted to know how he might get the attention of BigCo to get his company acquired.

It would have been laughable if he wasn’t so serious.

I realized that the acquisition question is one a lot of founders (nowadays) think about as an avenue out of their startup woes.

It’s you, not BigCo

I quickly corrected the assumption he’d made about BigCo holding the purse strings and reminded him that it is the customers that hold the money. I also shared with him that there are basically three reasons why a startup gets acquired:

After reviewing these examples and highlighting that his idea did not fall into any of these buckets, I shared with him some thoughts on why he should settle in for a long journey.

It’s not you, it’s BigCo

In the early days of a startup, the founders and the early team are in search of a business model that works (product-market fit). While the model might be fluid and uncertain in these times, one thing they’re setting is the culture of the organization or their system (the business).

Paradigms, culture, and goals are the highest “points of leverage” (see image below) in any company, and this is where the bulk of this startup’s time goes–even though the team does not realize it. 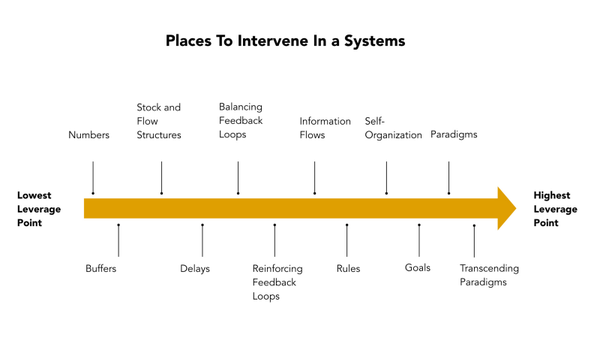 BigCo’s case is the opposite. Numbers and structures are the lowest leverage points within a system/company. It is at these lowest points of leverage that the majority of the employees at BigCo operate in.

Competition and disruption impact the paradigms and goals (higher points of leverage), but the true information about how much is going on with competition/disruption never reaches the executives. This information gets filtered and sanitized within the company, and the size of that company determines how much filtering goes on.

Executive decisions are made from these sanitized pieces of information. An example: employees get a directive to grow X percent this year. To avoid their bosses getting pissed, they make up numbers. When the numbers come in below projections, everyone wonders how it happened.

The larger the organization, the longer it takes to go from goals, numbers, to accountability (the necessary feedback loop). And we haven’t even gotten to paradigms, which are pretty much set for every large corporation.

Unless BigCo’s executives flag your startup as a goal-impeding entity (unlikely) or paradigm-shifting possibility (you’ve probably stopped being a startup at this point), you won’t be a competitive factor or even an acquisition target.

In the example above, all the decisions at BigCo were made without true consideration of the frantic and internal culture-defining actions of a startup. What startups need to do is to be intentional about its own internal paradigms—a tough ask in the early days.

The founder I was chatting with cheered up after realizing that there was a paradigm shift he could tap into as he built his company. Only then would he be able to disrupt the industry and maybe build a huge business. Only then will BigCo also pay any attention (and it might be too late).

Taxify is entering the e-scooter game