On Friday, Tim Cook will mark the seventh anniversary of his ascension as Apple’s seventh chief executive officer. At 57 he’s in his prime, and all signs point to a durable tenure. When Apple’s board named Cook CEO back in 2011, the directors signed him on for a decade with massive stock awards that finish vesting in the summer of 2021. (On his anniversary, Cook is set to collect stock worth about $120 million (roughly Rs. 840 crores) thanks to a run-up in Apple shares.)

Cook is the face of Apple, and design supremo Jony Ive is arguably the next most important executive. But more than 100 other folks collectively help run the world’s most valuable company.

Apple rarely discusses succession planning, and when asked about it at the company’s most recent shareholder meeting, Cook said “passing the baton” wisely is one of his most crucial responsibilities. He also said succession planning for all key executive roles has been on the agenda at every Apple board meeting in recent years, though he didn’t identify any potential candidates.

If Cook were to leave his post in the near term, potential successors would include Chief Operating Officer Jeff Williams, whose profile has risen steadily inside and outside Apple, and marketing boss Phil Schiller.

Beneath them are dozens of vice presidents, and Bloomberg picked 15 who are crucial to the Apple of today and the company of tomorrow. Apple declined to comment. 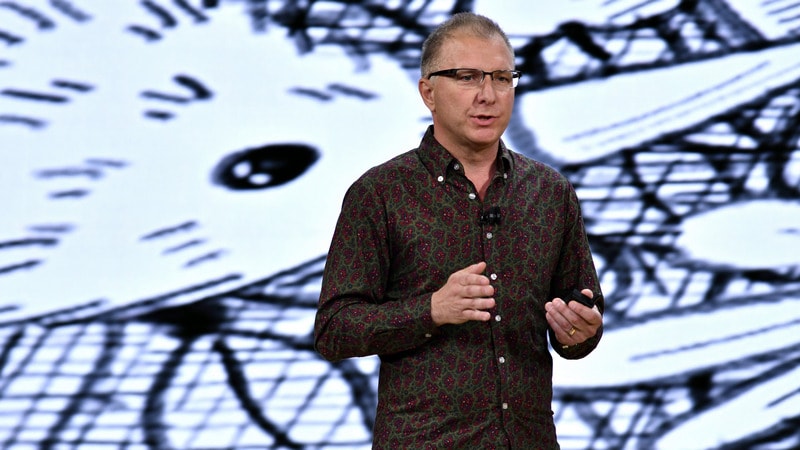 Greg Joswiak, VP, Product Marketing
Joswiak-or Joz as he’s known at Apple-may be the most important executive not featured on the company’s executive profiles page. He’s become central to product launches and recently debuted a low-priced iPad for students. A couple of years ago, Joz got oversight of marketing for all Apple products, ranging from iPhones to iPads to the Apple TV, Apple Watch and applications.

Joswiak helps dream up new products and is considered critical to the company’s success. He reports directly Schiller, and insiders believe he could eventually succeed his boss. Joswiak got his start at Apple decades ago running marketing for the PowerBook laptop, gaining more responsibility and eventually taking over iPod then iPhone and iOS marketing. “If there’s ever another major shakeup at Apple,” says someone familiar with the company, “he’s the guy to keep an eye on.”

Tim Twerdahl, VP, Apple TV Marketing
Twerdahl joined Apple in 2017 from Amazon, where he ran the Fire TV business. While Apple TV never became the hit Steve Jobs hoped it would, the set-top box is doing better. On the company’s last earnings call, Cook said the 4K version was enjoying double-digit growth. Twerdahl is in charge of turning the Apple TV product, along with the TV app pre-installed across Apple devices, into the ideal stage for Apple’s upcoming original content efforts. He reports to Joswiak.

Stan Ng, VP, Wearables Marketing
Ng has been at Apple for nearly 20 years, moving from a Mac marketing manager to more senior iPod and iPhone marketing roles before taking on responsibility for the Apple Watch. Ng used to appear in iPod promotional videos and talk to the press about the music player’s latest features. At Apple, marketing isn’t just about portraying a product in ads or figuring out what to call it; the marketing group helps envision new products, dream up new features and then tweaks them to be beloved by consumers. The Apple Watch, AirPods and other wearables that fall under Ng’s purview are just a side business but it’s one that helps sell iPhones and is the envy of other technology companies. 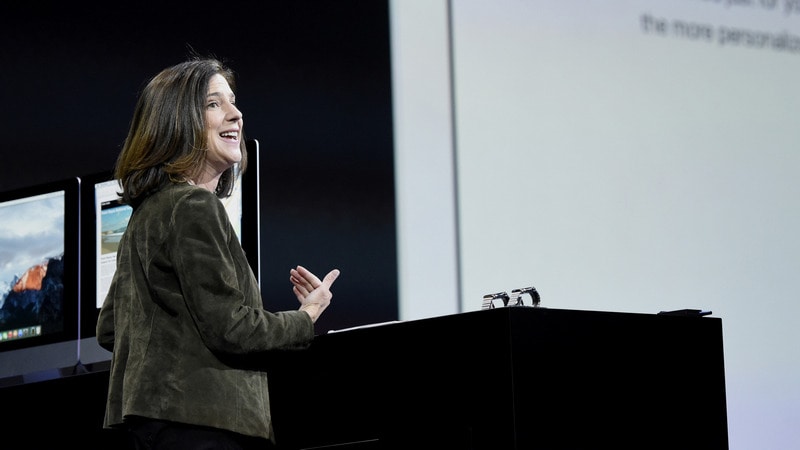 Susan Prescott, VP, Apps Marketing
Prescott became one of the first female Apple executives to speak on stage at a product announcement when the Apple News app was launched in 2015. Today, she oversees marketing for Apple’s bevy of apps, and recently announced the new Mac Stocks, Voice Memos, Home, and News apps at the company’s 2018 software developer conference. While Apple generates most of its revenues from hardware and services, apps are key to gluing together the Apple ecosystem.

Sabih Khan, VP, Operations
Khan is the wingman to chief operating officer Williams (much as Williams was to Cook when the latter was COO). In recent years Khan has inherited more responsibility for global supply chain operations that churn out hundreds of millions of devices per year-tasks once handled by Williams. Khan runs day-to-day manufacturing of the iPhone, as well as other devices, and his team has gotten involved increasingly early in the design process. Besides Cook and Williams, he’s key to “keeping the trains running on time,” says someone familiar with his work.

Mike Fenger, VP, IPhone Sales
With over a billion units sold, it may seem like the iPhone can sell itself. But the responsibility of striking deals to actually sell the iPhone globally falls on the shoulders of Fenger, a sales executive who left Motorola for Apple in 2008. During his tenure at Apple, Fenger has also overseen key enterprise sales deals with General Electric Co. and Cisco Systems Inc.

Isabel Ge Mahe, VP, China
Ge Mahe worked for years as an Apple software engineering executive until Cook handpicked her to run China last year. It’s a crucial role because China generated about 20 percent of Apple’s sales last year, making it the company’s third most important market behind the Americas and Europe. After losing momentum there, Apple has tailored its offerings to Chinese consumers-including a gold iPhone and mobile payments-and is banking on strong services growth. One of Ge Mahe’s most difficult challenges: continuing Apple’s nascent comeback in China without running afoul of Beijing.

Doug Beck, VP, Americas and Northeast Asia
Beck reports directly to Tim Cook and makes sure products are selling into the right places and coordinates the deals that get Apple’s devices in stores and used at businesses in the Americas and Asian countries including Japan and South Korea. He’s been at Apple for almost a decade, gradually expanding his purview over sales efforts. He’s also a U.S. Navy Reserve Officer and served overseas.

Sebastien Marineau, VP, Software
The software engineering leadership is stacked with company vets, but BlackBerry transplant Marineau has risen quickly. Marineau joined Apple in 2014 and oversees key device software for the Camera and Photos apps and system security-two areas that are critical to his employer. Marineau’s almost two decades of experience got him into Federighi’s inner circle, and Marineau is increasingly the main representative for the developer-centric portions of Apple’s annual software conference. 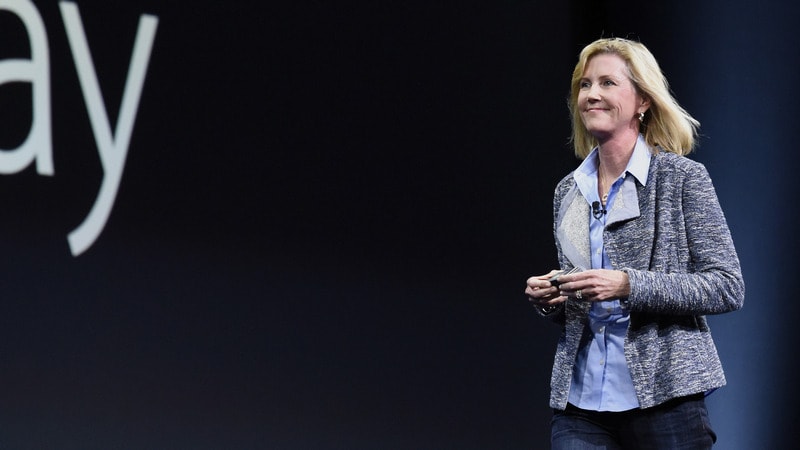 Jennifer Bailey, VP, Apple Pay
Bailey is a key Apple services executive. She oversaw the launch and development of Apple Pay in 2014 and continues to be its driving force in meetings with retailers and financial partners. So far, Apple Pay has amassed over 127 million active users, according to analysis from Loup Ventures, but its global penetration in retail outlets still has room to grow. If Apple is going to achieve its goal of turning services into a $50 billion per year business by 2021, it’s going to need products like Apple Pay to continue to excel. Before booting up Apple Pay, she ran Apple’s online store, perhaps the company’s most important sales channel.

Peter Stern, VP, Services
Stern joined Apple a couple of years ago from Time Warner Cable. Earlier this year, as part of a small re-organization in Cue’s services division, Stern was given oversight of video, news, books, iCloud and advertising services. All of these products are critical to Apple’s transition into more of a services company in the coming years. Look for Stern to take on an even bigger role at Apple as it pushes further into original content and streaming video.

Richard Howarth, VP, Industrial Design
For most of his career at Apple, Howarth flew under the radar on the famous design team that dreams up the look of the company’s gadgets. He has been key to the development of each iPhone model and the original Apple Watch. Then in 2015, Howarth took on a more public role when Ive relinquished day-to-day design team management to focus on the development of the new Apple Park campus. During that time, Howarth oversaw the design of the iPhone X, one of Apple’s most important recent products. Ive returned full time to running the design team at the end of 2017, but were he to step away again, Howarth would be the obvious candidate to inherit the top design job.

Mike Rockwell, VP, AR/VR
A Dolby Labs veteran, Rockwell is in charge of augmented reality. It’s a big job because Cook is convinced AR will be bigger than virtual reality, which he believes isolates users. AR lays digital information over the real world, offering countless potential consumer and commercial applications-streaming basketball stats to fans during games, say, or sending instructions to mechanics repairing complicated equipment. Apple is working on AR glasses that Cook is banking on to replace the iPhone. If Rockwell pulls it off, he’ll be the star of Apple product announcements for years to come.

Greg Duffy, Special Projects Hardware
Like Rockwell, Duffy is working on an Apple moonshot. Previously CEO of camera hardware company Dropcam and an executive at Alphabet Inc.’s Nest unit, Duffy joined Apple a couple of years ago to form a secretive hardware team filled with satellite experts. Last year, he poached Google’s top two satellite imagery executives, suggesting his new hardware team is working on an initiative that potentially could include satellites that take images for Apple maps. On his Twitter profile, Duffy simply says, “working on something new!” John Ternus, VP, Hardware Engineering
Ternus has recently become a public face of Apple’s Mac hardware efforts, announcing new versions of its iMac desktop and MacBook Pro laptops at last year’s developers conference. He’s also been the executive explaining Apple’s renewed focus on professional Mac users, who had been feeling increasingly ignored by the company. In addition to overseeing development of new Macs, he also leads development of the iPad and key accessories like the AirPods. The prior head of iPad hardware engineering, Dan Riccio, is now the senior vice president leading all Apple hardware efforts. Ternus could be one of the executives eventually in line for the top hardware job.