Kratos has gotten old. That’s the first thing you’ll notice in the new God of War. The upcoming PS4 reboot of the series starts with the angriest Greek in gaming glowering down at a tree that you chop down with Kratos’ new weapon of choice: the Leviathan Axe. As he swings the axe, you can see more scars crossing his arms and chest since we last saw him, and his perpetually scowling face is hidden behind a beard that’s sporting a touch of gray.

While much has been made about Kratos’ reinvention into an older, bearded dad, it’s not just Kratos who’s aged. It’s been almost eight years since the last God of War game was released on the PlayStation 3, and in that time, the series seems to have undergone some maturing of its own. From both a story and gameplay perspective, God of Warhas grown up, turning the mindless hack and slash series into something with more thought and strategy than any game in the series that’s come before.

After the previous events in the series — the last of which started with Kratos storming Mount Olympus and ended with him killing almost the entire Grecian pantheon, culminating with Zeus himself — it’s hard to imagine how the new God of War could go bigger than that. Instead, the franchise looks to be taking an interesting turn toward telling a deeper, more personal story. It zooms in on Kratos as a person and father instead of just the rage-filled warrior of past games. “I wanted to tell a far more intimate story,” says God of War director Cory Barlog. “I want to take a character that everyone thinks that they know and show that there’s actually hidden depth and dimension.” Hence the quasi-reboot for the story, which is self-contained from the previous games. Players of the earlier games will be rewarded with additional context that will further deepen the experience. Just calling it God of War instead of God of War 4 is a telling move on the developer’s part.

I recently had the chance to play through the first two hours of the game, and early on, the more personal nature of the experience is on full display. The story starts with the relationship between Kratos and his son, Atreus, who joins players as a companion on the adventure. Barlog has spoken before about how Kratos’ journey has been shaped a lot in the game by his own experiences as a father, and there’s a level of emotional depth to the proceedings here that is new to the series. 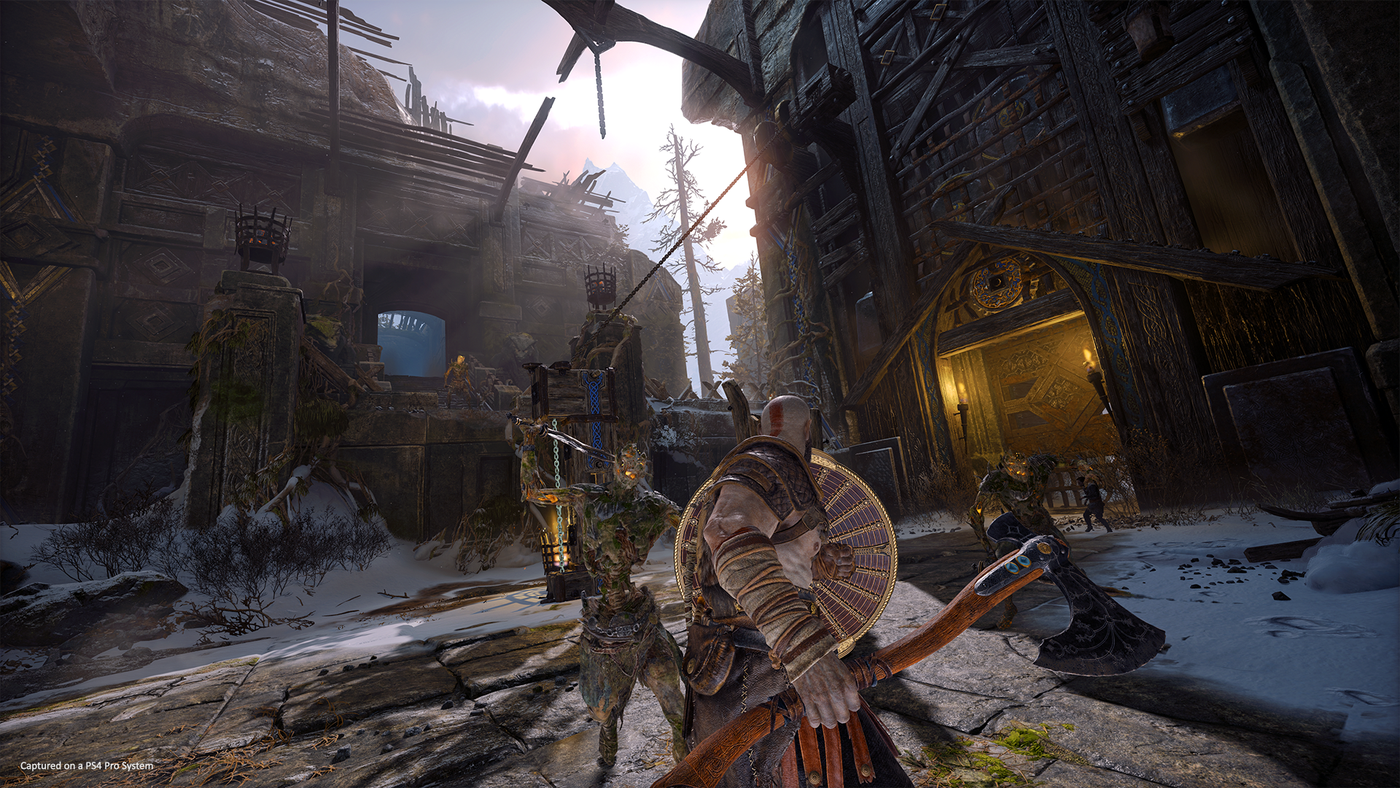 That doesn’t mean there’s no spectacle at all. God of War is still, well, a God of War game, and that means that there are still plenty of giant monsters, brutal battles, and hordes of enemies to dispatch along the way. But gameplay in God of War has been completely redone, and it all starts with the camera angle. Instead of the locked-in, pulled-out views of previous games where players were just along for the ride, God of War brings the camera right over Kratos’ shoulder and hands control over to the player. Barlog says the change tells a more personal story, and that shift inspired the rest of the changes about how the game functions.

GAMEPLAY IN ‘GOD OF WAR’ HAS BEEN COMPLETELY REDONE, AND IT ALL STARTS WITH THE CAMERA ANGLE

Combat in God of War 2018 feels — and it’s strange to be using this word in the context of a God of War game — more realistic in some senses. Gone is the combo meter, the showers of colorful orbs upon defeating enemies, and the quick-time even Instead, there’s a more deliberate, tactical approach to battle. Pulling the camera in closer to Kratos makes fighting feel more personal, and there’s a weight to attacks now that other games in the series lacked. The closer perspective also forces players to keep track of the battlefield more instead of just aimlessly mashing buttons and hoping that things work out. 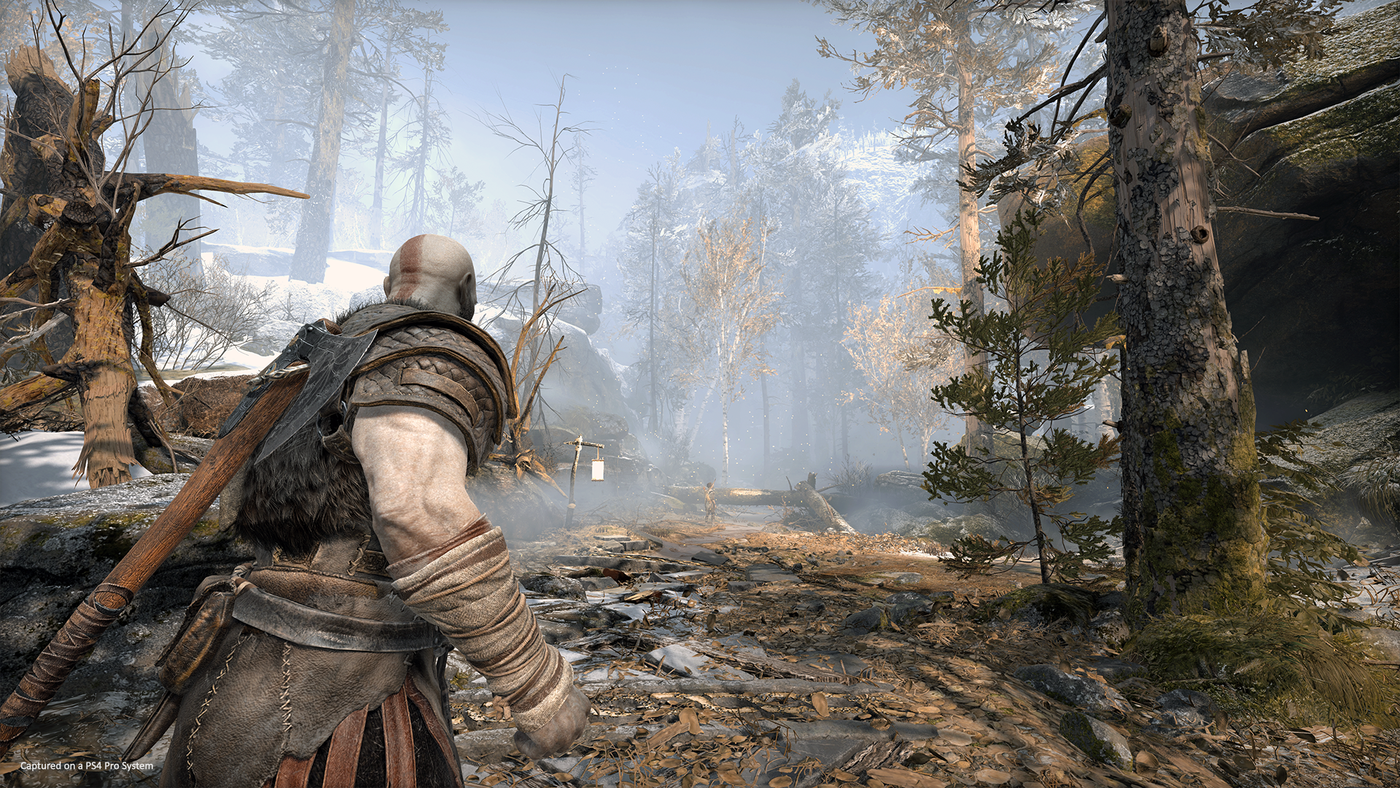 The more measured approach even trickles down to the weapons Kratos has; instead of the paired blades he usually carries in previous titles, Kratos actually has a shield now. And you’ll need it, too: charging in, axe swinging, with little thought for dodging or blocking is a very good way to get killed in God of War. And from a less analytical perspective, the freely controlled camera also enables an incredibly fun axe-throwing mechanic. Players can freely aim and throw the axe at any time, and it’s really satisfying to land shots in enemies from across the way. Even better is the Thor-like ability to recall the axe back to your hand, which when correctly timed, can deal additional damage as it whips through more foes on its way back.

It’s not just the story elements that offer a more mature ethos on games; it’s the entire system of play. For the first time, there are serious RPG elements in a God of War game. Kratos will grow stronger and level up as players progress, and you’ll be able to customize armor, abilities, and weapons to favor different styles of play. Prefer an all-out attack? Invest your upgrades into sheer attack stats. Prefer a more measured approach? That’s possible, too.

Kratos’ son Atreus also plays an important part in broadening the experience. Unlike other persistent companions in games, like Bioshock Infinite’s Elizabeth, Artreus isn’t just there to provide some background commentary. He’s an active part of the proceedings, with an entire controller button dedicated to having him fire his bow at whatever enemy the camera is pointing at. Atreus exists in the world right alongside Kratos — at one or two points, I had to protect him from an attacking draugr with a well-thrown axe — and players will be able to upgrade his abilities as well to make him a more potent force in combat.

The game also looks absolutely gorgeous. The change in setting has given the God of War team a chance to spread their wings beyond the dark, dimly lit stone arenas and stormy skies of the previous games and into the fresh air of the Norse outdoors. The snowy, sunlit forests feel ripped right out of the equally beautiful Horizon Zero Dawn from last year. The attention to detail is astonishing, right down to the stitching on Kratos’ leather armor and the chips on the edge of his axe. In one particular mini-boss fight, you could see even see the individual slashes that each of Kratos’ blows were leaving on the unarmored torso of the giant troll that I was battling.

There are still some cracks in the facade, though. God of War is a very linear game, right down to the obviously marked walls and ledges that Kratos can climb over. Sure, there are some light environmental puzzles and a couple hidden rooms, but it’s still a very directed experience. With the trend in big-budget games moving toward giving players more freedom, the strict paths of God of War feel a little outdated in 2018.

I’ve only played a small sliver of the game, so it’s still too early to make any final judgments, but I’m excited by the changes that have been made. At the very least, it’s great to see that the series is willing to take some risks with its formula and shake things up in the process. And if it fails? At least it’ll give us Dad Kratos memes.

God of War releases on the PlayStation 4 on April 20th.

Facebook rolls out 3D photos that use AI to simulate depth